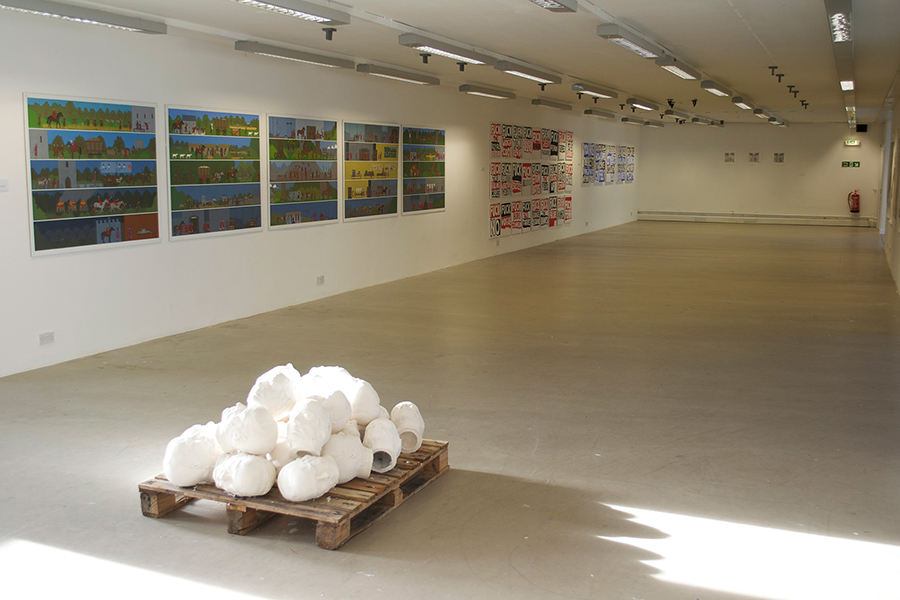 1. The peasants put on their masks of shame. They are taking in the harvest. Their supervisors wear half or full masks depending on their status. The king wears a purple cone-shaped mask and the priest a red hat. The peasants live in mean hovels but use the common land to pick berries, collect firewood, fish, hunt and keep their animals.
2. The peasants share is small. They get angry
3. and the priest preaches them a sermon about obedience and the heavenly reward, disobedience and the hellish consequence. The peasants are not pacified. In open revolt they take off their masks but the king gets wind
4. and has them burned out.
5.In gratitude to the leader of the arsonists the king grants him a manor of his own and makes him his steward.

1. The steward buys sheep,
2. raises rents, clears land and kicks out cottars.
3. He takes his wool to market. Many are homeless
4. and drift to the growing towns.
5. The steward sells his wool and buys guns and goes abroad with his henchmen and his diseases.

1.They treat the locals brutally.
2. and they die like flies
3. In the mountains the steward sells his guns to another European at the silver mine
4.and takes back a load of it
5. as the slave trade gets underway

1. Back home the streets are full of beggars, prostitutes and thieves. Security is tightening.
2. The newly enriched steward goes to see the king who tells him about the riots, banditry and open defiance of the peasants.
3. The king explains his idea that the spirit of the peasants can be broken if the priests were to suggest that the devil was abroad and that everywhere women were in league with him and working evil in the land. In this way the peasants will turn against themselves.
4. The king gives the steward a load of posters to nail up.
5. He heads home warily.

1.The steward goes back to his manor half-convinced of the witch stories himself they are so salacious.
2. At the manor he gives his supervisor a promotion for taking care of everything. The newly promoted man tells his boss about an elderly barnacle of a woman who keeps a herb garden and is the midwife. She sounds unsavoury.
3. Keen to make an impression the supervisor takes some men and burns her out. She curses him just as the cat startles his horse and he falls
4. and breaks his arm. In the climate of paranoia created by sermons and print the supervisor is able to accuse her of witchcraft
5. and she is convicted and burned.