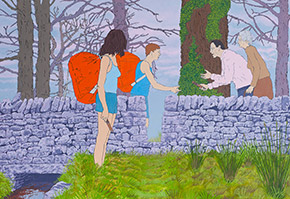 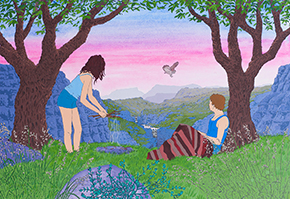 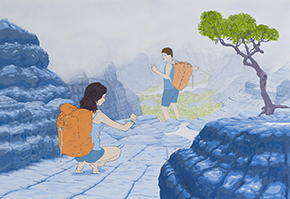 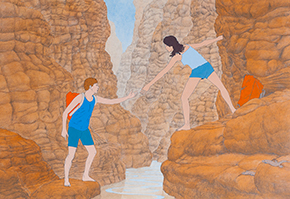 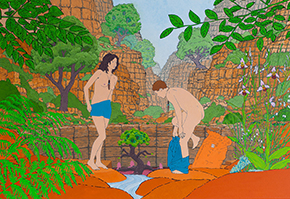 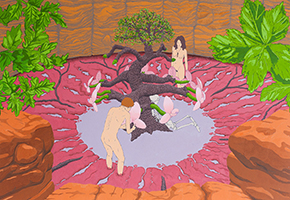 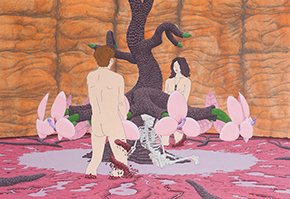 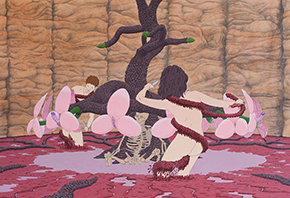 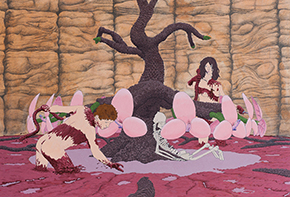 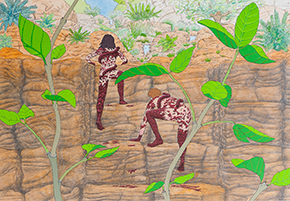 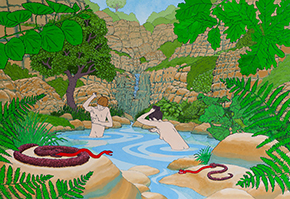 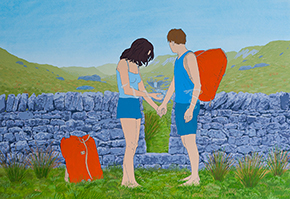 This is Rites of Spring, subtitled A story for adolescents in 12 pictures. It’s a story about puberty. It’s about their first experience of the sexual drive.

At the beginning two elderly people give each adolescent a knife. It is a ritual experience, an initiation or a rite of passage, something which all young people in this place must undergo.

So they set off and the journey is long, through uninhabited wild country. They go into the hills, over the mountains, through a deep gorge and eventually they arrive at a pit and at the bottom of the pit is a tree with flowers which look like human genitals.

(The tree functions somewhat similarly to the bee orchid which has developed flowers which simulate a bee’s genitals so that the bee tries to copulate with the flowers and through this action fertilises the flower.)

The pit is constructed of huge stone blocks to contain the tree.

At the base of the tree is a human skeleton. It rests against the trunk. The community which has sent the young people on this journey also bring the dying to the tree so that their bodies will nourish it.

The young people undress and make their way down to the tree. They approach the flowers and begin to copulate with them but as they do a living root rises from the mud and threatens to strangle them. Taking the knives they were given they cut themselves free and escape.

While they wash themselves in a pool, two snakes emerge from the severed roots as though sloughing their skins. The adolescents return bringing their snakes with them. The snakes themselves have become transparent almost invisible emblems of their awakened sexuality.

My interest in puberty and adolescence grew out of an interest in conformity and unthinking obedience. I was struck by Stanley Milgram’s experiments of the early 1960’s in which large numbers of volunteers were prepared to give what they believed to be lethal electric shocks to voluntary experimental subjects at the command of an experimenter. Milgram was interested in the situation in Nazi Germany where a vast bureaucracy administered the management of the extermination camps. He wanted to understand how people can deny responsibility for their action by telling themselves that they are simply obeying commands. At the same time I was attracted to the work of Wilhelm Reich and particularly his understanding that sexual repression made it impossible for people to understand their own motivations, undermining their self-confidence and damaging their ability to empathise with others.  Reich thought that people in this condition found it difficult to form close relationships with others, became isolated and withdrawn, and consequently they were more susceptible to manipulation by authority.

Reich appears to answer a little of the question which Milgram raises.

As a result I became interested in how we bring up children, the restrictions we place upon them in the name of education, what we inhibit in that process, how we condition them and particularly how we treat the transition from childhood to maturity.

Because puberty is a time when young people are particularly vulnerable, when the slow process of individuation accelerates. They become fertile. Their emotional range increases. Their experience of pleasure and frustration becomes more intense. They can make one another happier or more miserable than before. And this happens at a time when their relationships with their parents are weakening and the demands they make upon their friends are becoming greater so that they are very vulnerable.

Recognising this acquisition of new powers and abilities and the potential dangers to themselves and others of misuse, other cultures have constructed ritual and myth around this development. Rites of Spring is a contribution to this tradition.

Script for an interview in which Giovanna C. Coppola asked Chad McCail a series of questions to which he responded in front of two of his works, Rites of Spring (A story for adolescents in 12 pictures) and Monoculture. View PDF formatted version.